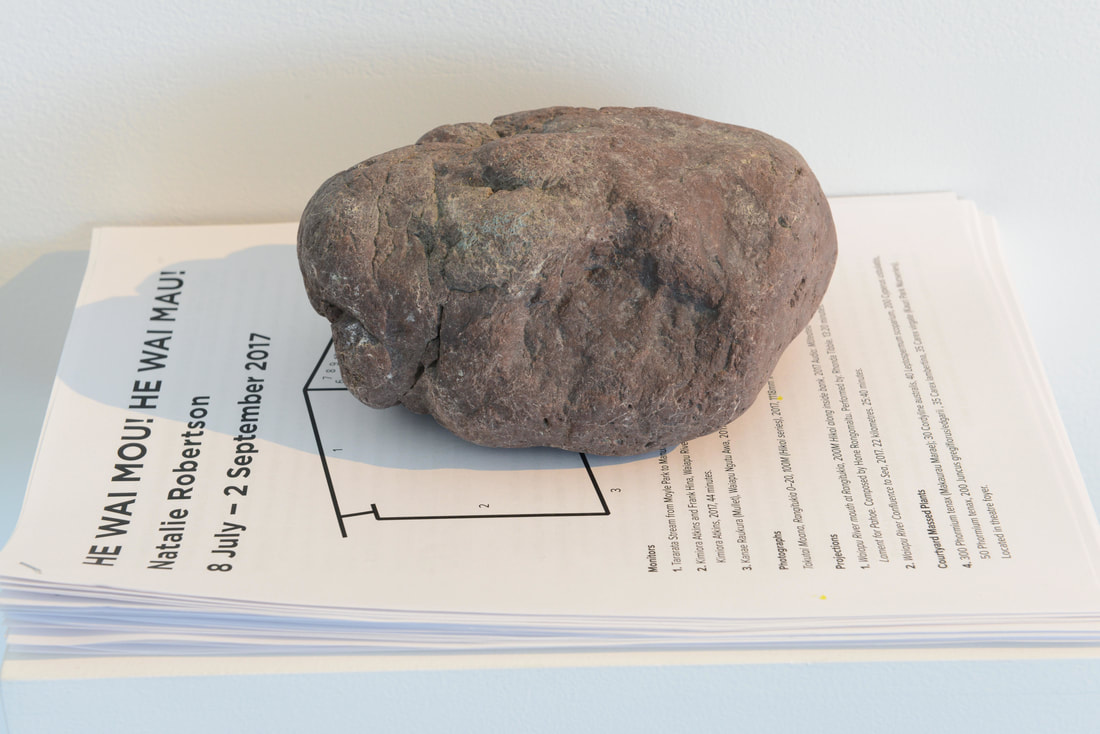 This project challenges us to support the mauri of Aotearoa streams and rivers. The exhibition title speaks to both the tapu and noa elements of water. Wai is the life-blood of the land, with both its ritual and sacred elements, as well its functional, everyday elements. Our mauri – life-force – is interconnected with the life-force of our waterways and our lands. They are barometers of our cultural health and wellbeing. The title comes from Te Waiu –Te Wai Māori mo Ngāti Porou, a karakia that was voiced at Tikapa Marae, on November 7th, 2015, at the signing of the Joint Management Agreement between Te Runanganui o Ngāti Porou, and the Gisborne District Council.
He wai mou! is for Papatuanuku, and is the sustenance of her being, her blood.
He wai mau! is for us, the living and is the water of life that sustains us and can be used for everyday life.
Drawing on customary and contemporary stories of land and place, Natalie Robertson’s work examines paradoxes of economic development and environmental destruction. Rangitukia Hikoi 0–20 (2016–7) is a new photographic installation of Rangitukia beach, Te Tai Rāwhiti, which examines the impact of deforestation on the land of her iwi, Ngāti Porou.

According to this tribal lore, mana whenua have occupied this region since Māui Tikitiki a Taranga fished up the island out of the sea. Natalie has long sustained her whakapapa relationship with the Waiapu River watershed and coastal foreshore, as a trustee of the land through her hapū, Te Whanau a Pokai. In the wake of the 2012 Ngati Porou Treaty Settlement, the scars of colonialism are still experienced, written in the land.

For Takutai Moana – Rangitukia Hikoi 0–20 (2016–17), Natalie pegged out 21 markers at five metre intervals along 100 metres of the beach, returning daily to photograph over a week-long period. At this location, the driftwood and sand combine in coastal accretion, as sediment flows out of the river mouth. Natalie’s large-scale format is familiar, redolent of New Zealand artist Colin McCahon’s paintings Walk, 1973, which also present a sequence of views showing the changing states of the tide, the horizon and sky. Natalie’s work similarly shows the changing weather, reflecting on the mutable environment. However, this photographic work serves another purpose. The takutai moana, the foreshore, is a politicized environment and from a Ngāti Porou perspective, a spiritual pathway. It is an immersive document of the environment; a record for future generations to experience the state of their landscape in 2016 and 2017, capturing evidence and heritage for years to come.

Using cameras, Robertson documents the Waiapu River in East Cape and more locally, at the Tararata Creek here in Māngere. In one video work, Robertson’s niece Kimiora Atkins paddles Waiapu, creating a close-up portrait of the river shot from a kayak. In another video work, Kanae Raukura (grey mullet) swim, a reminder of the species dependant on the well-being of their watery habitat. Then, Robertson’s aerial footage, shot with a drone, shows the awa from a bird’s-eye view. This journey follows a mōteatea, or lament, that describes the downstream journey of her ancestors. Her cameras also search out details that draw attention to the human-made interventions, the persistent erosion, and de-forested banks.

​The same aerial technique is used on Tararata Creek in Māngere. The work highlights the plight of this urban stream, also impacted by human occupation, and struggling with pollution. The amassed plants on display in the courtyard are part of a project to support inanga spawning by re-planting a portion of Tararata Creek, known as The Love Zone. Two stones from the Waiapu River mouth hold the mauri (life-force) of the land for the duration of the exhibition.